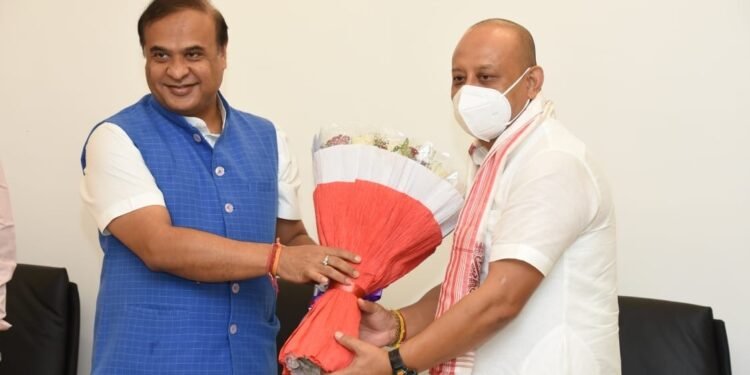 Guwahati: Two-time MLA from the Congress, Sushanta Borgohain has officially joined the Bharatiya Janata Party on Sunday in presence of the BJP’s state president, Bhabesh Kalita, and other members of the party.

The two-time Congress legislator from the Thowra constituency met Chief Minister Himanta Biswa Sarma before his decision to join the party. Borgohain resigned from the primary membership of the Congress on Friday.
In his resignation to the newly appointed Assam Congress president, Bhupen Borah, Borgohain claimed that the reason behind his resigning was that there was an “internal political atmosphere” in the Congress party.

In his resignation, Borgohain added, “Unfortunately, all the efforts in this direction proved futile, compelling me to take this ultimate decision and the exact reasons for such a painful move on my part have already been conveyed to the senior leadership of the party both in the state and at the centre.”

It may be mentioned that ever since the new government in the state took charge with Himanta Biswa Sarma being the Chief Minister, Borgohain is the second MLA from the Congress to quit the party in order to join the BJP. Earlier, four-time MLA, Rupjyoti Kurmi had quit the party so that he could join the BJP.

The Congress had earlier alleged that Chief Minister Himanta Biswa Sarma has been attempting to create a government with no opposition in the state by influencing more opposition MLAs to join the BJP. The Congress in the state has also termed Sushanta’s decision as a betrayal.

"No selling of Tobacco to Children in Assam"