Thieves Rob 1.5 Lakh Worth of Goods in Gamaibari of Tripura ‌ A gang of thieves cleaned a clothes shop on Saturday night in Tripura. The group of thieves snatched goods worth more than Rs 1.5 lakh from the shop, causing panic among small traders. The incident took place at Gamaibari area under Teliamura police station late Saturday night.

On the way to Sajal Babu’s shop this morning, a pedestrian reported that the lock of Sajal Saha’s shop had been broken and the shop had been burglarized. Immediately the owner of the shop came and saw that the thieves had broken three locks in his shop and cleaned his hands of various items including sari-blouse. He further said that in front of the media that the cash box of his shop was broken and there was some cash in it, which was also stolen by the gang of thieves.  The shop owner has informed about the robbery at the Teliamura police station and initial inquiry is on.

A ‘Unknown Pneumonia’ more deadly than COVID detected in Kazakhstan 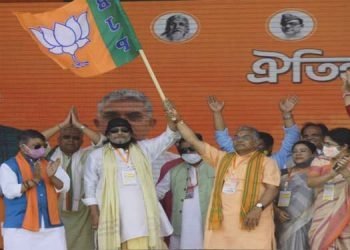