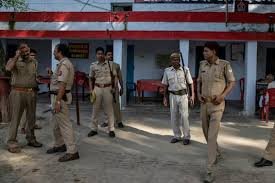 Days after a Rajasthan priest was burnt alive, another priest in Uttar Pradesh’s Gonda district was shot at on Saturday night over a land dispute.He is Identified as Samrat Das. He was the priest of Ram Janaki temple located in the Etiathok Kotwali area, the priest has been referred to Lucknow Trauma Center in a critical condition. Local police registered a case in the matter and have arrested 2 accused. While two more accused are absconding and a search operation was launched.

As per information, the miscreants shot Das and immediately fled the scene. Another priest of the same temple Baba Sitaram Das was also attacked by miscreants last year and a police investigation is still going on in this matter. After receiving first aid in a nearby district hospital, Das was referred to Lucknow in critical condition.

“Two people have been arrested and police are searching for two other people involved in the attack. The condition of the priest Samrat Das is out of danger and he is undergoing treatment in Lucknow. All the accused in this case will be nabbed soon. Both the parties involved in this matter were having a dispute over a piece of land,” SP Shailesh Kumar Pandey told the media.

17 Years After Kalpana Chawla’s Death, Her Father Opens Up About Her Dream

17 Years After Kalpana Chawla's Death, Her Father Opens Up About Her Dream