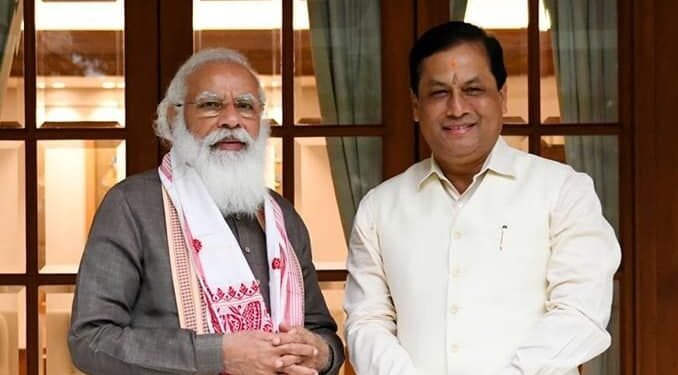 Guwahati: Former Assam Chief Minister Sarbananda Sonowal finally took oath as Minister of the Modi-led cabinet in Rashtriya Bhavan. He was the second minister in the Cabinet to take the oath.

Assam Former Chief Minister Sarbananda Sonowal has taken the oath in the Union Cabinet. He promised to serve his best to the people. He will do his duty according to the law and he will be fully dedicating himself to the people and will accelerate his work according to the constitution of India.

Among these, one of the most discussed leaders is the former Assam Chief Minister Sarbanada Sonowal. He in discussion ever since the Assam Assembly Elections took place as Sonowal had “sacrificed” the CM’s berth for his ‘colleague’, Himanta Biswa Sarma. He had been a 2-time Lok Sabha MP and had also served as the Union Minister of State (Independent Charge for Skill Development and Entrepreneurship; and Sports and Youth Affair before becoming the CM. Sonowal won the Assam Assembly Elections twice from the Majuli constituency.

Along with Sonowal three other leaders from the North-Eastern region also took the oath. Among them, MoS Youth Affairs and Sports Kiren Rijiju, Inner Manipur MP Rajkumar Ranjan Singh, and Tripura West MP Pratima Bhoumik also took the oath in presence of the President.

Sonowal and his new Journey

Sonowal and his new Journey